…or do you halloween?

we celebrate, but we don’t go all out.  i might could get behind lightin’ it up around here, but i don’t have energy for all of that.

can we fucking not?

i don’t like egg dyeing either, but it doesn’t involve knives, so i can work with it.

my husband is the king of patience and always does such a good job with the kids.  he even makes us pumpkin pies and roasted flavored pumpkin seeds with the guts.  if guts isn’t an appetizing word, i don’t know what is.

guts pie.  does that make you hungry, baby?

even though he does a great job, i decided when i handed it off to him that i was ok with paying for their therapy over their mom refusing to have anything to do with pumpkin carving.  but, as it turned out- i don’t even think they miss me and my eye-twitching, compulsively scratching my butt hives (yes, it gives me butt hives), and saying “oh my god” every 1.363 minutes self.  so now, i come in, snap a few pics, and then retreat to another room.

clearly i don’t mess around with the pumpkins at all, but costumes is all on me.  we don’t really have any hard and fast rules about costumes after year 1, but i do like a theme or at least a very loose commonality that if explained to people the connection they go- ahhhhhhh, ok.  i think the year that was most difficult to convince myself was ok was the year we had “ANNie Oakley” “ANNie” and a “TyrANNasaurus Rex Skeleton.”  Not my best work.  I’m woman enough to admit that.  there was also a year that the kids’ theme was “things that fly” and laurel was dorothy from a wizard of oz. that was rather macabre now that I think about it.

the year of the loosely themed ANNs 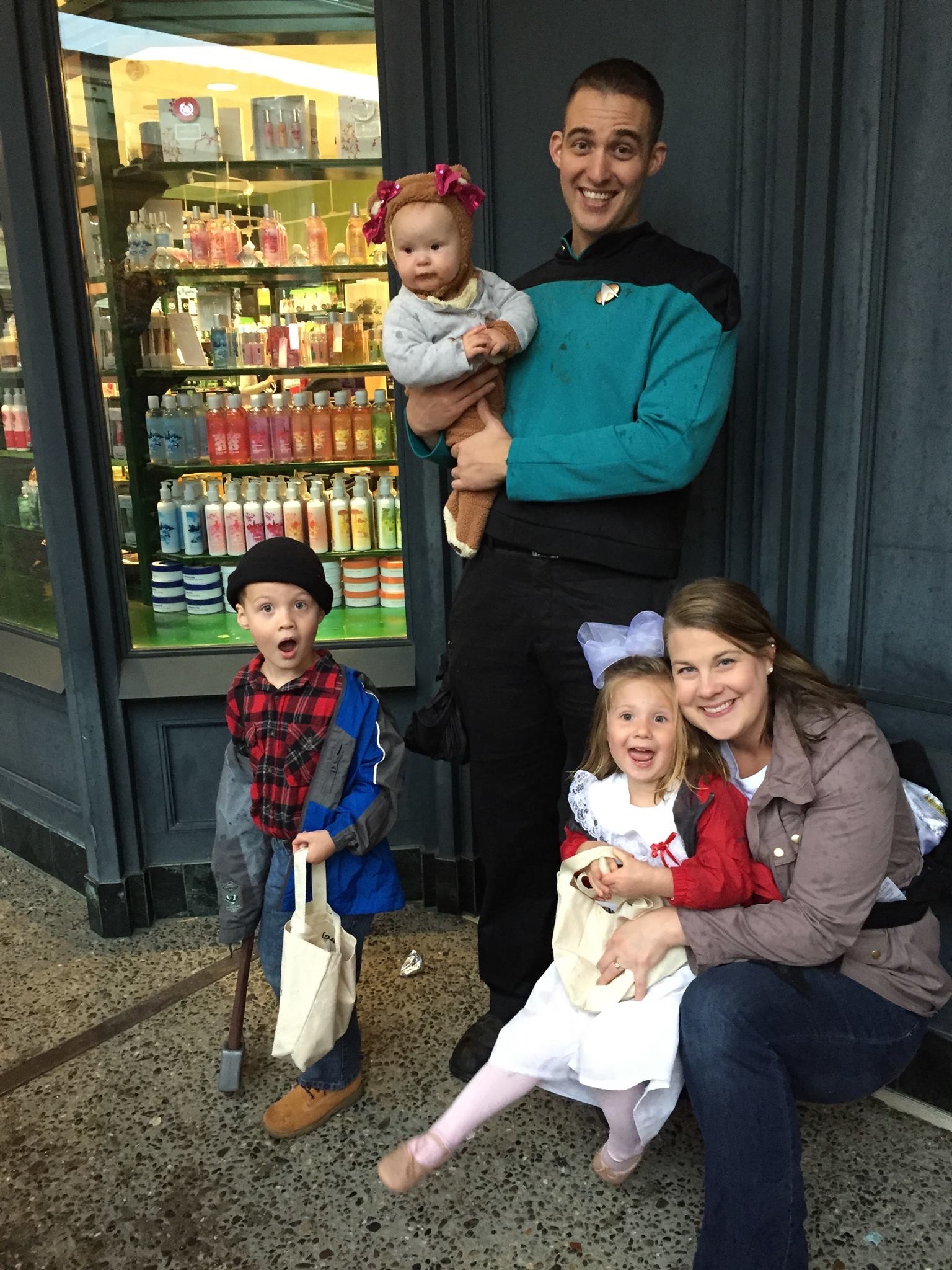 i am going to go ahead and apologize for the quality of these pictures.  my kids are older and smart phone quality wasn’t always what it is now.  my og iphone camera only had 1 lense.  not this new fangled 3 lenses with the precision of a fly eyeball and the sleekness of a dolphin.  so, i am going to tell you what i tell my kids- you get what you get and you don’t pitch a fit.

the only real rule we have about halloween costumes BESIDES that mom has veto authority is that my kids’ first year they’re a bear.  jack was a carebear. clara was the bear portion of lions and tigers and bears, oh my!, marian was marian the liBEARian because i love a pun, and laurel was just a bear with a bow- i think- cause i was tired and being mom to 4 kids under 5 is hard.

i always get my kids a second costume to wear to school on halloween.  i would love to tell you it’s cause i am cool and my kids love to dress up.  the real reason is that my kids are filthy child beasts at meal time and if i sent them to school in their trick or treat costumes, i would not be able to take them out in public in them later.  so, i hop over to goodwill and get them a second costume that they get ZERO say in and make sure that they have it to wear to school.  this year, marian hit the jackpot with the mari queen of scots costume i got for $3.99, but clara came in a close second with the purple stuffed unicorn for the low, low price of three fitty.  coincidentally, all of colorado springs looks like jack frost forgot to get the flu shot.  clara will be the toastiest of the school going drews and will likely be super thankful that she is.

this year clara decided to be hermoine granger and marian thought ginny weasley sounded pretty good.  jack being the good sport, though slightly grossed out by the idea that harry potter eventually married ginny, agreed to be harry potter.  laurel “wanted to be dora for christmas” which we explained to her many, many, many, many times was not a thing.  she eventually settled on hedwig because clara told her that she could sit on someone’s shoulders all night. normally i disagree with the big kids making promises that mommy and daddy have to make good on to the littles, but we all already knew that was going to happen because laurel has been working the my legs hurt angle for years.  it’s good to be the baby.

i don’t have a picture of marian in her costume yet because she didn’t go to trunk or treat with the other 3, so you’ll just have to do without.  trust me, she’s real cute.

we are everybody dump out your candy when you get home and eat as much as you want.  nobody has puked yet from this obviously ridiculous policy (*knock on wood*). SOOOOORRRRRRYYYYYYY teachers.  truly i am.  this year the day after halloween 2/3 of my school aged kids have to take a baseline standarized test.  at least they’ll be plenty of room for growth for the spring.

after day one, everyone’s candy gets put into a consolidated candy bag.  the kids are allowed a piece or two after dinner for a few weeks and then it’s forgotten about on top of the refrigerator until i do summer cleaning.  upon finding it, the kids have another round of eating all the candy they can because it’s summer and i have surrendered.  and then a day or two later when they have forgotten about it, i throw it away because by this point its all discolored and sticky anyway.

if you’ve made it this far in the blog, i salute you.  i need to take this time to talk about the most important aspect of trick or treating.  MOMMY TAX.  my tax isn’t a constant, but when my kids dump out their candy- i stroll by and pick out my favorites.  i don’t like the same things my kids like so for us that’s not a thing.  but, if i did, i would probably take a little of my favorites from each kid as a reminder that i built them from scratch and carried them around for 10 months.  with that logic, laurel is getting double the favorites taken from her because i had to carry her around 24/7 on the outside for 6 months too.